Café Mosaic, which reopened on Tuesday 18th May in the Rose Room, is now returning to the Bradbury Centre (assess from Peach Place) from Tuesday 15th June.

Sunday Morning Worship in the church resumed on Easter Day, 4th April and opened further on 25th July.  Updated guidelines.  The weekly pre-recorded services have been replaced by live service recordings as from 25th July.

Have you been enjoying watching the Olympics this week?  I wonder if you have a favourite event to watch.  It good to see our athletes doing so well and enjoying success.  It has struck me that when interviewed after receiving a medal, the athletes nearly always thank the members of their team who have supported them.  It’s a reminder that behind each successful medal winner there is a whole team of supporters – coaches, physios, mentors, family, friends and other athletes – a team working together leading to success.

As a church community we are most effective when we’re working together as a team, with many people each contributing towards the whole.  As our church life becomes busy again, we are in need of more people to make a contribution.  It would be a great help to have new members of the sound and AV teams each Sunday morning – training and support can be provided.  And as the café increases its opening hours from September, it would be wonderful to have some more volunteers.  Do have a think about what you could offer and speak to me of one of the Stewards team.

I am leading our worship this Sunday.  And following on from last week’s look at the feeding of the 5000 we’ll be thinking about Jesus’ description of himself as “The Bread of Life” based on John 6: 24-35.  Our worship will include Holy Communion and a recording of the service should be available on the website in the afternoon.

I hope that you have a good week,

With every blessing
Catherine

A reflection from Rosi MorganBarry

The last phrase of the Lord's Prayer: “for thine is the kingdom, the power and glory ...”

Why don't they say it?

Because it's not in either Matthew's or Luke's version – although some later translations of the Bible put it in Matthew 6: 13.  However, it's not in the Authorised Version, Good News, NIV, RSV, etc.

You mean it's not in the New Testament?

So where does it come from?

From the first century Didache.

The Didache – the Teaching of the Twelve Apostles, a short anonymous early Christian text, written to teach the Gentiles about Christianity.

So what we say at the end of the Lord's Prayer is not in the Bible at all?

It's in 1 Chronicles 29: 11:
“Yours O Lord, is the greatness and the power and the glory and the victory and the majesty, for all that is in the heavens and in the earth is yours.  Yours is the kingdom, O Lord and you are exalted as head above all”.

King David at the dedication of the Temple in Jerusalem.

So why do we say it – or rather a shortened version of it?

To remind ourselves, as David reminded his people, that:
All things come from you, O Lord, and of your own we have given you.
(1 Chronicles 29: 14)

Rosi is writing our reflection for this week so it’s just a short letter from me.

I hope that you have had a good week and that you haven’t been too overwhelmed by the heat.  It’s been lovely to see our Café Mosaic busy with friends catching up and enjoying coffee together – there’s been lots of chatter and laughter!

It will be good to welcome Revd Jackie Case to lead our Sunday morning worship and the theme is the feeding of the 5000 as recorded in John 6: 1-21.  This year we are working through Mark’s Gospel, so I wonder why the compilers of the lectionary chose to use John’s account of this miracle rather than Mark’s?  Maybe you could take the time to compare the two accounts (Mark 6: 30 – 44) and see if you notice any differences.

No booking is required for the service in the church building from now on, but we do ask that you wear a face-covering and that you respect other people’s personal space by leaving empty chairs between households.  It would be good if people were to leave the building as soon as the worship is concluded so that any conversations are held outside.  The live service will be recorded and should be available on our website on Sunday afternoon.

I hope to see you soon,

With every blessing
Catherine 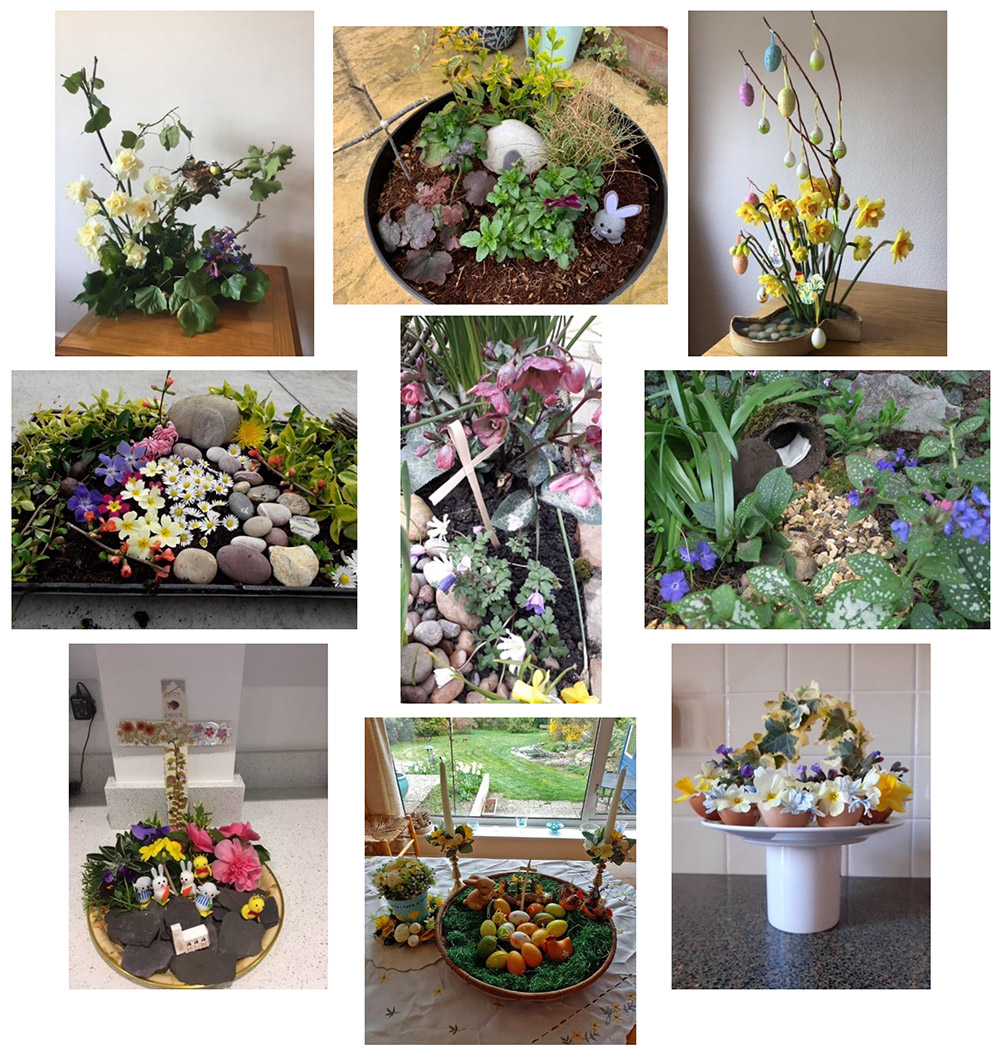 Many thanks to those in our congregation who shared their Easter Gardens with us.