In 2017, we celebrated 200 years of the Methodist church in Wokingham; also at that time, Wokingham Borough Council began the process of regenerating the town.

We are fortunate to have a town centre church with a busy community centre, and as we began to organise our celebrations, we knew that the area around the church would change completely – it was about to become a noisy building site with all the challenges that might involve.

After much discussion we began to see this as an opportunity to do something to make ourselves visible in the new Peach Place.  We wanted to celebrate the people of the church who had gone before us and create something for the people who would come after us, while remembering the church community who worship here now.

The Town Council were planning to commission a series of mosaic roundels reflecting the town's history, to be set into the town's new paved areas.  They invited us to be included in their meetings and discussions and to be part of the plan for the wider community in Wokingham. 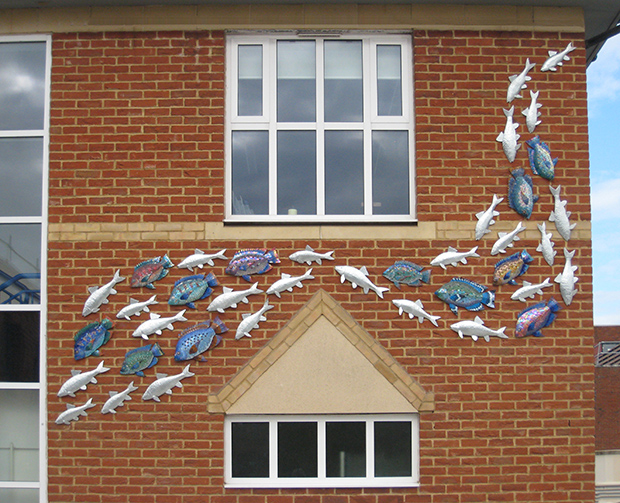 Eventually, we decided to commission a sculpture for the corner of the church that would face into the new Peach Place and we wanted the sculpture to be based on the Christian symbol of fish.  The mosaic artist, Rosalind Wates, was very enthusiastic about the idea and designed a shoal of fish that would sweep across the side of our building.  She researched the fish living in the Sea of Galilee and found the colourful St. Peter fish that could be inspiration for the mosaic fish, and a carp for the contrasting metal fish. 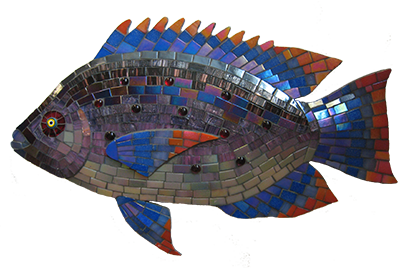 Rosalind had worked with Thrussells, a company of metal artists in Cornwall, so they were engaged to make the metal fish.

We had sample fish made and began fund raising; our aim was to have as many fish as we could afford with the ideal being twelve mosaic fish to represent the apostles and 28 metal fish to make a biblical number of forty.  Most of the fish were sponsored by families in memory of a loved one, some were sponsored by church groups and groups associated with the church.  Donations were also made by church members and the wider church community at fund-raising events.

Amazingly, it wasn't too long before we had the money needed to pay for all the fish.

The contractors who were building Peach Place very kindly agreed to install the fish on the outside wall of the church; they also wanted to make sure that we could have a grand unveiling and planned to make a curtain to cover the fish when they were in place. 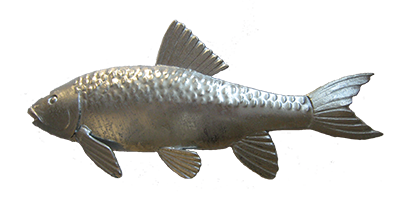 On the 8th July 2019 we began the planned installation of all the fish; it took three days of preparing the wall, expert drilling and precise measuring to get each fish in place.

As the artists worked away to produce the sculpture and the contractors installed it, we began to plan a service of celebration on July 14th.

On that Sunday afternoon, at 3.00pm, there was a large gathering of church members, past ministers, the town mayor, members of the town and borough councils, artists and contractors all in the square, eagerly awaiting the unveiling of the sculpture. The Revd Catherine Bowstead led the service, welcoming the guests and giving a brief history of the Sculpture. After singing a hymn, the Anniversary Sculpture was unveiled by Jane Bonney (do I mention that after all the careful planning and two rehearsals, the curtain got stuck on a fish tail – our hero Wayne came to the rescue with a large piece of wood and earned the biggest round of applause).

After a prayer blessing the sculpture and thanking everyone involved, tea was served in the Bradbury Centre. 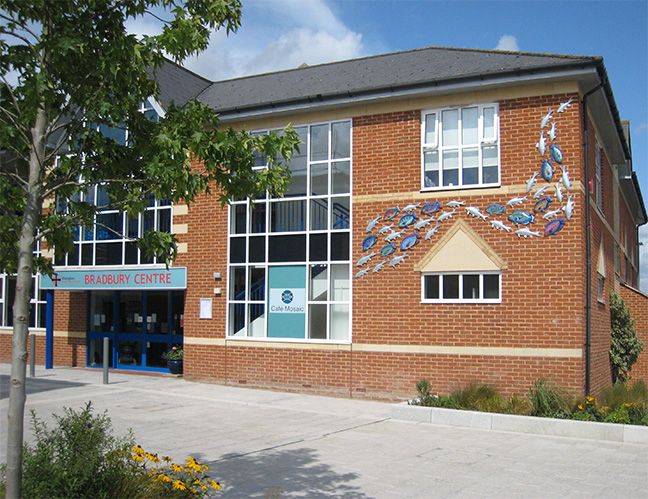 This is not the end of the story of the fish. We see it as the beginning of another chapter in our Church's history; there are many stories about fish in the bible and many stories of fish as a symbol. We hope that the church community and the people of Wokingham will find their own meaning in the Anniversary Sculpture.