MORS is a Church Social Group open to “Methodists of Rose Street”, and to all other friends of the Church.  Our main aims are to encourage friendships to grow and to welcome everyone into the overall Church family.

We try to meet these aims by arranging:

A further aim is to raise funds in support of Church activities and Local Charities.

All meetings and trips are cancelled until further notice.

Our February meeting saw a return visit by the professional wildlife photographer, Tom Way.  On a previous occasion, he had proved his expertise by showing us animals around the British Isles but, this time, he took us worldwide to countries such as Borneo, Sumatra, Sri Lanka and parts of Africa.  Displaying exceptional pictures of Orangutans, Gorillas, Blue Whales and shy Meercats, he indicated the hardships he had to put up with – sitting for long periods, sometimes in water, without moving, occasionally with ‘dangerous’ animals only feet away, and always ready for a speedy dash to the safety of his vehicle.  His final Africa selection of Elephants and Rhinoceroses was used to highlight the dramatic decline in numbers in the wild and to show that we should be doing all we can to counteract this trend.  Altogether, though, his pictures confirmed the high regard in which he is held by his fellow photographers.

We were quite relieved to find so many turning up during the Coronavirus scare to hear Colin Brown expound on the work of the Royal National Lifeboat Institution (RNLI) on 3rd March.

It was in 1824 when Sir William Hillary felt the need to start up such an organisation but, at that time, it was largely sea-based.  However, in 2000 the service was extended to cover Lifeguarding on certain beaches around the country and ‘The Marchioness’ disaster of 2001, in which 51 people died, lead to further extension to the River Thames.  Perhaps surprisingly, this latter service, using water-jet powered boats, has been used on 847 occasions out of 4 separate stations.  Because crews are already on-base, these boats should be launched within 90 seconds!

Prevention was the topic for the rest of the talk – Respect the Water, Don’t get cut off by the tide, Don’t go in to rescue your dog, Don’t fight the water simply relax and float!!  Colin then used video clips to show the care the RLNI take of their boats and volunteers and to give some idea of what both have to put up with.  Visits can be arranged to their base in Poole.

MORS, as such, has enjoyed the usual variety of speakers at monthly meetings ranging from ‘The Queen’s Other Houses’ in April 2019 to a rather controversial talk on ‘Dowsing’, or Water-Divining, in July.  Major changes took place during the summer with the eventual combining of the two groups into MorsContact with a judicious merging of office bearers from each.  Initially, we, in MORS, had intended to have a rest-period during the winter months but, after comments from members, monthly meetings have continued throughout.  As a joint group, we have enjoyed, amongst others, a fascinating report on the World Scout Jamboree in USA, the History of White Waltham Airfield and a thought-provoking account of the work and experiences of the Royal National Lifeboat Institution.

With the changing times and personnel, we had decided to omit the annual anniversary service from the MORS programme (perhaps to be replaced by a ‘Church’ anniversary?).  However, other ‘regulars’ included a visit to Hever Castle in Kent and a band concert, this time with the Bracknell and Wokingham Community Band supporting an ‘a capella’ choral group.  At time of writing, another BA band concert was planned for late March.  Unfortunately, another regular in this report is the plea for others to offer to join the team, if only to help set up for meetings each month.

Contact, Young Wives or Wives Group as it was first known, began in September 1962.  The name changed from 1973 to be more inclusive.  The group met on the 2nd and 4th Wednesday evenings of the month.  One meeting had a speaker, while the other was usually a members’ evening.  There were a wide variety of speakers over the years, together with outside visits and theatre outings.

Ladies held their position on the Committee for 2 years only, so every year there were changes to the officers.  Often there were Church events to help organise, like Garden Parties in the summer, Autumn Fayres, Harvest Suppers and Christmas dinners.  The various Rose Fayres were primarily to raise funds for building projects, like the Rank Hall in 1964 and the extended Church in 1973.

An important spin off for over twenty years was the Keep Fit class which began in 1971.  An average of 20 women a week exercised with a teacher and pianist, and there was a creche for young children,  It was a form of outreach, as most particpants were not church members.

Today there are a number of ladies in the Church who have served on the Contact committee in various roles from 1970.  By 1976 the annual subscription was 30p with 10p paid at each meeting attended. Over the years the number of members has fluctuated. By 1984 Annual Programmes were circulated and this encouraged more ladies to join.  The average attendance in 1987 was 22, but two years later it had risen to 30. 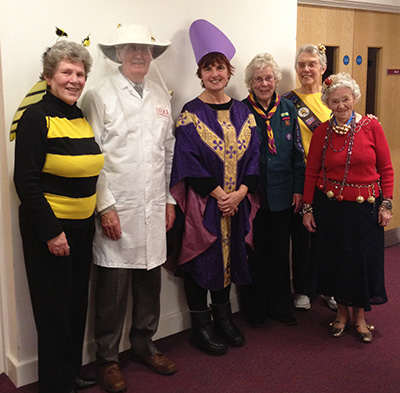 Norma Soby has held several roles over the life of Contact, and Cecily Amos, who became Treasurer in 1998, still holds that office.

There was talk of joining MORS in 1999, when the average attendance was down to 10, but the following year it was decided to only meet monthly instead, on the 4th Wednesday of the month,  In 2002 Janet Severn became Co-ordinator and remained so until she moved way in 2018.  In 2005 gentlemen began to attend Contact meetings which improved the average attendance.

In 2006 the building of the Bradbury Centre commenced.  Contact gave £100 to the Church, recognising that Powerpoint presentations were often used by speakers.  By 2009 subscriptions were £1.50 a meeting and from 2014 Contact members went annually to Daffodil Day at Methodist Central Hall.

By 2018, 51 members attended the AGM, with an average attendance at meetings of 38.  A sum of £420 was given for a large Mosaic fish, part of the design planned for the exterior of the Bradbury Centre wall.

So we arrived at 2019 where the 24 members at the AGM agreed that, mainly due to falling numbers and the average age of the group, Contact would amalgamate with MORS from 1st September 2019.  There will be 3 members from Contact on the MORS committee and we hope that some MORS members will join us at our informal meetings.

Contact had a varied programme in 2019 beginning with hearing about the great musical stars of the 1950’s, followed by the development of the London sewage system which linked with the talk on the history of Great Ormond Street Hospital.  Chris Parry shared her wide artistic talent and the year concluded with an organ and piano recital by Tom Barker.

However, it was decided at the Contact Annual General Meeting on 22nd May 2019, that Contact would amalgamate with MORS from the 1st September 2019.  This was mainly due to falling numbers attending, the average age of the group and the need to find six members to run each meeting.  Three members went forward to serve on the MORS committee.

Contact itself tried to continue informally on the afternoon of the fourth Wednesday of the month (from 2 – 4pm).  This began well and there were ideas as to what we could do, but by Christmas car parking was difficult, even if you had a blue badge, and numbers attending had declined.

It was therefore decided not to continue booking a room every month.  If folks wanted to meet, they could do so on the fourth Thursday morning of the month in the Café Mosaic, maybe even staying for lunch!  So far I understand there has been little response.

We would like to thank all the people who have supported Contact over the last fifty-seven years and to wish MorsContact continued success.  Some of us will miss the friendships we have made over many years.

Cecily Amos again organised a trip to Daffodil Day at Methodist Central Hall Westminster on Monday 2nd March 2020 which, as usual, was a well worthwhile experience, especially once their sound system was sorted.

Next year Daffodil Day will be on Saturday 6th March 2021.