We meet at 7:45 pm on the 3rd Tuesday of each month, except August.  Contact: John Soer or Jim Dunning.

The Club has over 40 members and enables men and women of all ages to share their common interest.

We meet in the Bradbury Centre of the Methodist Church, in Rose Street (Peach Place), where members enjoy a wide range of good quality presentations on transport topics, including heritage and steam railways, with the opportunity for refreshments and time for a chat.

We resumed ‘normal service’ in the Bradbury Centre in September. 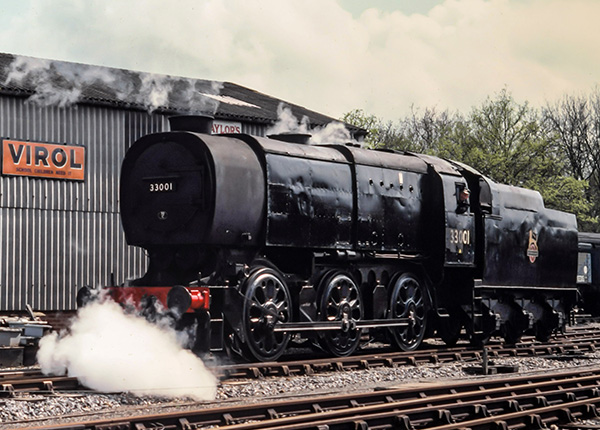 On 21st September there was a very good attendance at our first meeting in the Bradbury Centre since February last year.  Although there was a small hitch in the proceedings which meant that the presentation from Paul Joyce was not based on Plymouth but on the area between Basingstoke and Southampton, it was a very enjoyable and interesting talk.

Our journey started in Basingstoke with a brief look at the architecture of the station, followed by a survey of the trains that have been seen there since the 1920s, ranging through freight trains, expresses such as the Bournemouth Belle to modern electric units.

This was followed by a trip along the Basingstoke & Alton Light Railway.  Although this closed in 1932, it is still possible to find traces of its route.  Paul supplemented modern photographs with old postcards showing the various stations.  That at Cliddesden was used in shooting the 1937 film ‘Oh, Mr Porter!’.

An aerial photograph showed the vast area covered by the railway works at Eastleigh.  Paul showed slides of the various types of locomotives to have been seen there.  Among these was surely the ugliest type of engine ever seen in this country.  The Q1 class (illustrated) of the Southern Railway.  These were built in 1938 when it was realised that, with the approach of WWII the SR, essentially a commuter railway, was going to need more locomotives capable of hauling heavy goods trains.  The result was the Q1 - built with the minimum of material and designed for easy maintenance.  They proved to be excellent machines and lasted until near the end of steam haulage in the mid-1960s.

In Southampton we saw the large Southampton Terminus station of which most of the site is now covered in housing as well as the varied traffic through the Central Station.

It was good that we were able to meet together again and we look forward to our next meeting on 19th October with Robert Williams, the Chief Executive of Reading Buses.  Not only is Robert responsible for the Lion 4/4X and the Leopard 3 services, but also the Thames Valley (formerly Courtney) services and the Green Line from Bracknell.

Despite Covid-19 we did manage to hold five meetings in 2020 – January, February, and the last three months of the year.  Special thanks are due to David Morgan for hosting the last three of these on Zoom.  These did provide a small outlet for those finding the lockdowns difficult.  Despite the small number of meetings, we were able to raise £100 for the Railway Children Charity.